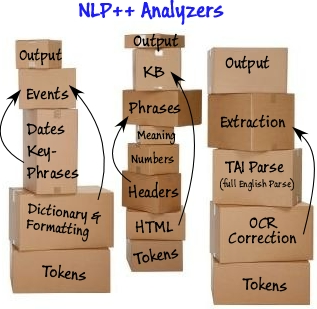 My degree is in Linguistics. I hung out with really amazing linguists for almost two years while getting my masters degree and know what an amazing thing human language was, is and will be. Linguistics can be very complicated and linguists’ job is to make sense of it.

Linguists are often confused with polyglots: those that can speak many languages. In the modern era however, linguistics is not about that.  Rather, it’s about the “systems” that make up languages.

Today’s linguists break up the world of language into sounds, words, phrases, sentences, semantics (meaning), and discourse (story). They like levels — easy-to-understand boxes where they can concentrate on one level at a time.  It gets too complicated too fast to try to mix levels.

One reason there are so many box-like language tools out there: the nature of the people building them and the structure of the working groups that these tools come from.

Because getting computers to understand humans is a daunting task, this task is mostly left to the universities and then those coming from the universities. These projects are necessarily made to fit the model of students coming and going into projects. Thus, compartmentalizing projects becomes essential when using these types of work teams. Many person-decades may be put into systems, but they are constructed by ephemeral workers.

The boxes often stem from the linguistic focus or specialization of the students doing the projects, helping them produce PhD theses. Lexical, syntactic, semantic, and discourse (story) – all become the boxes converted to computer programs and then enhanced and attended by this transient academic workforce.

The workforce then goes out and starts a computer company or goes to another university and repeats the cycle. There are several inherent problems with these boxes.

A second problem with the box world are the boxes themselves.  What if we now need an XML box, or HTML box, or OCR box? That must be fit into the system and, without a general system, becomes a long and difficult process.  New boxes (or tailoring for a particular task) are needed for every text analyzer application, but most systems fail miserably in supporting them.

And that gets us to why Natural Language Processing is in great demand, but is feared as well, and has hit the glass ceiling of confidence.  Everyone wants it, but no one feels confident that the current vendors out there can solve or handle or adapt to their problem.

One, you are not expert at processing human language and are not conversant with the tools being sold for that. You are at the mercy of the NLP vendors, and that is VERY uncomfortable for those needing text analytics.

Two, you are really worried not only about pumping money into a black box which you can’t see, can’t trust, can’t understand and can’t control — you are also fearful of taking the plunge.  It is expensive and the risk is too high.

Three, you have a problem that never fits “exactly” into a vendor’s NLP toolset, so even though you get some results, customization is also needed right away.  Sure, you can pay for customization and sure, you may have the money for such customization, but there is one thing you cannot pay for:

“Confidence the Text Analyzer Can Get Better with Time and Effort”.

That is the current problem with text analytics technologies.  It is currently paralyzed by fear.

A Computer Language for Human Language

When a company needs a website, they know they can use a package out there and then customize it to their needs.  There is no package that fits a company perfectly.  Something has to be customized. Most companies buy a product, have someone outside the company customize it, or hire in-house programmers specialized in that tool or language to keep up with the demands of an ever-changing company website.

The same holds true for text analyzers.  No matter what text analyzer you buy off the shelf, there has to be customization.  The problem in the “Box” model is that they are mostly black boxes, and you can’t hire anyone who can change the black box.  The confidence level is very low that the text analyzer will be able to keep up with changing needs, and improve.

It would be ideal if there were a programming language and programming interface (IDE) that would allow anyone (or at least any programmer) 100% access and control of a text analyzer, written like any other computer program. That would give a customer the confidence that they can “see” everything, learn to understand everything, and even make a judgment from the computer code that such a text analyzer is not only feasible, but capable of improving with time.  If a new phone number sequence, or new vocabulary, or new slang phrases, or new html formatting, or new OCR errors pop up, then the computer program written for the text analyzer can be modified where needed, giving a customer the confidence that spending money and investing in text analyzers is a worthwhile and even profitable endeavor.

The architects of this technology have been implementing analyzers the same way computer programmers develop computer code to make websites, create and use databases, and analyze data. NLP++ is a computer language that gives customers the confidence that someone, either the architects or their own programmers, can maintain and improve a text analyzer for the ever-changing text being thrown at it.

One important note in the NLP++ story is that, not only is it a computer language for human language, but it allows for something humans do all the time: communicate between levels of their language understanding.

Humans can use their “world knowledge” to understand that the text “HIIVI” from a document that has been scanned using OCR (Optical Character Recogniztion) software is really the word “HIM” where “M” has been mistakenly changed into an “I”, a “V”, and another “I”.  NLP++ allows for marking such a pattern for use further in the processing steps to be recognized as the word “HIM”.

Also, whereas black-box NLP tools normally have a fixed-order sequence of processing levels, NLP++ and VisualText (the NLP++ Graphical User Interface) allow for as many levels (and revisiting, mixing, and inserting levels, or “boxes”) as makes sense for your problem.

There are many reasons why this technology changes everything when it comes to Natural Language Processing.

But the most important reason that NLP++, VisualText, and the conceptual grammar changes the game is because it finally frees companies and programmers from the burden of building or using inflexible tools for the task at hand.

This has three implications: